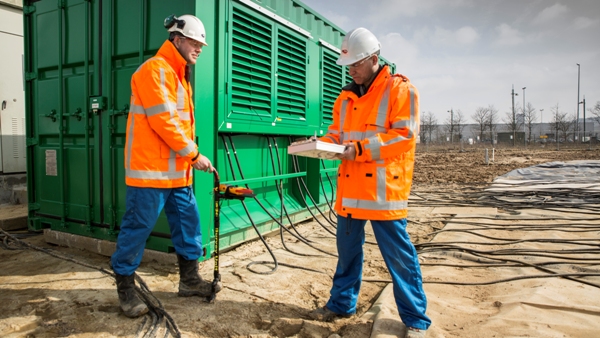 Background
The site has a long history of storage, handling and distribution of all kind of chemicals. Over 10 years ago in-situ remediation started by extracting a mixture of vapors, polluted groundwater and DNAPL via an intensive network of Multi Phase Extraction wells. By that time the site activities were still in operation.

Around 2012 it was decided to redevelop the site to residential. To do so, the site activities were stopped, the infrastructures were demolished, the ongoing in-situ remediation measure was stopped and it was decided to remove the residual source zone polluted by chlorinated solvents by excavation. The excavation was carried out to a maximum depth of ca. 6 to 7 mbgs. Due to inflow of groundwater (present at a depth of ca. 3 mbgs) it was not possible to excavate deeper.

It was clear that DNAPL was present down to the geological foundation, a clay layer at ca. 18 mbgl. It was therefore decided to treat the deep pollution by in-situ thermal remediation.

Site characteristics & design parameters
The site lithology consists of a sandy backfill of the excavation until ca. 6 mbgs. From 6 till ca. 13 mbgs silt, including sand lenses, are present. Below this heterogenic silt layer there is sand present until clay at ca. 18 mbgs. This clay at 18 mbgs was reconsidered as the maximum pollution depth. The sandy layer between 13-18 mbgs becomes more coarse towards 18 meters. Just above the clay layer the sand becomes more like gravel.

The depth of the water table is ca. 3 mbgs and groundwater flows in general at a rate of 4-5 m/year.

The remediation region covered an area of 635 m² to a depth of 13 mbgs (shallow ERH area) and an area of ca. 330 m² from 13-18 mbgs (deep ERH area). In total this reflected a polluted volume of 23.875 m³. Upfront it was estimate that the total chlorinated pollutant mass was between 13 and 50 tonnes.

Using the on-site PLC and telemetric system, all sensors were monitored in real time and data logging was completed.

Figure 1 shows the site infrastructure as well as the above ground vapour and water treatment. Since a lot of mass was expected, not only including chlorinated solvents but also a lot of alcohols and mineral oils, and the emission standards were very strict, we installed a very intense vapour treatment system. Collectively, this contained a steam condenser, a ca. 350 Nm³/hr ventilator, a VOC condenser (cooling towards -20°C), an aliphatic scrubbing system and a Catox unit with a capacity of 1.500 Nm³/hr to remove any residual vapors. Before releasing the extracted soil vapors into the atmosphere the vapors were neutralized by an acid scrubber. The condensed steam was air-stripped before re-injection or off-site disposal. HMVTRS also contracted to treat these vapors for a fixed-price. Operations began early March 2015 and the ERH remediation was finished in October 2015.

Results
During 215 days of operation a total of ca. 25 tonnes of pollutants were removed from the subsurface and treated by the vapour treatment system without exceeding the air emission limits. All shallow monitoring wells met the remediation criteria of 5% solubility values.

In the deep ERH area it was more difficult to reach the remediation criteria due to a much higher groundwater flow rate than expected upfront, by more than a factor of 50. The results of the Deep ERH zone are presented in Figure 3; in the end the target results on average were reached. Only at one deep monitoring well the PCE concentrations were between 5 and 10% of solubility.